Keep Calm and Have Faith 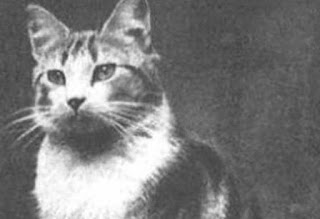 "This is Faith, church cat at Church of England (Episcopalean) Church of St Augustine's and St Faith's, Watling Street, London. She was awarded the Dicken Medal in Silver, and a silver medal from the Greenwich Village Humane Society of New York, for her her courage in sheltering her kitten (Panda - he was black and white) in a hidey-hole in the rectory basement, to which she had retreated from her more comfortable position upstairs, in the course of a severe bombing raid on the night of 9 September, 1940. The church and rectory were, basically, battered and burned to destruction by the Luftwaffe, but Faith continued to shield her kitten, under a heap of smouldering rubble, until rescued by her human friends the following day. Shortly afterwards, the remainder of the church fell down, destroying her position of refuge. Faith resumed her life as church cat, dying peacefully some years later on her mat in front of an ecclesiastical fireplace. The kitten, Panda, went on to a successful career as resident cat in a care home. Yes, I know - this will seem silly to many In Here. But consider. Apart from the fact that it is true, Faith's story became widely known in London at the time, and must have contributed to the morale of many hard-pressed Londoners. Her courage and endurance reflected something that Londoners hoped to find in themselves - and generally did. I am a cat person, by the way ... Best regards, JR."
Posted by Susan Elia MacNeal at 12:24 PM 4 comments: Links to this post